I’ve been following Ben Eater’s series on building a 6502 computer on a breadboard. Once I got the 65C22 VIA working with a bigger 4-line x 20-character LCD display, I wondered if I could interface the computer directly with an external keyboard. The IBM Personal System/2 (PS/2), released in 1987, had what became a very commonly used keyboard and mouse connector, which uses some convenient electrical signals for interfacing with even-more-ancient technology like the WDC 65C02 and 65C22 this breadboard computer is based on.

Electrically, PS/2 is very simple: power, ground, clock, and data. The clock is driven by a microcontroller inside the keyboard, at a rate around 10-16.7 kHz. The data line is valid when the clock is low. Data and clock are open-collectors, so they can be connected directly to the computer with pullup resistors.

I acquired a PS/2 connector and soldered four wires to the correct pins. +5V on power, 0V on ground, and the keyboard flashed its three status lights so I know I didn’t short it out or install the pins backwards. That’s good.

I connected the PS/2 clock wire to NMIB (pin 6 on the DIP-40 W65C02S), and tied it to the 5V rail using a 1kΩ pull-up resistor. Because I was making hardware changes anyway, I also added a pushbutton to IRQB (pin 4 of the W65C02S) for an easy way to trigger a second kind of interrupt. (It helped a lot when debugging - in the interrupt service handler, I could print whatever info I wanted.) 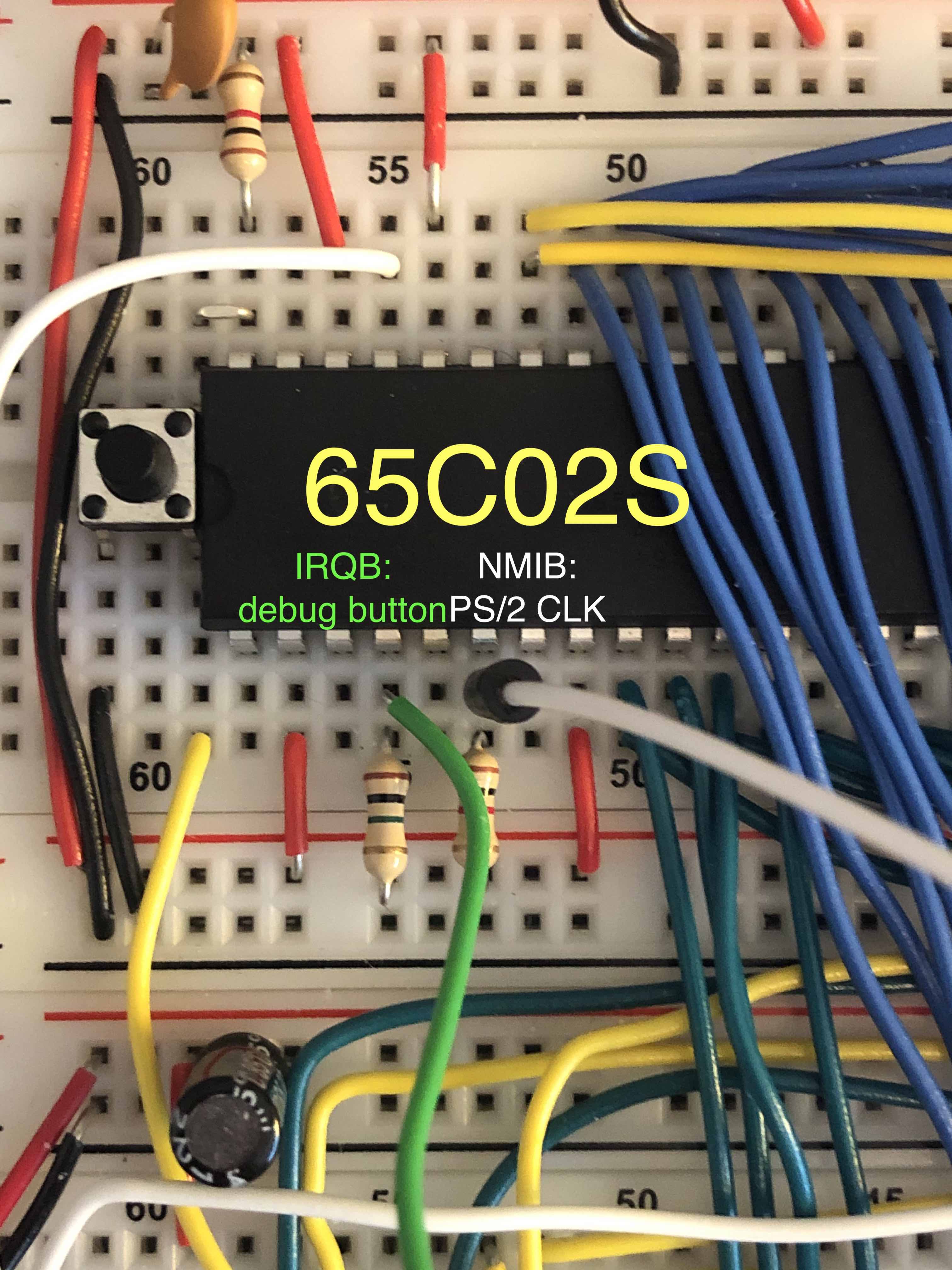 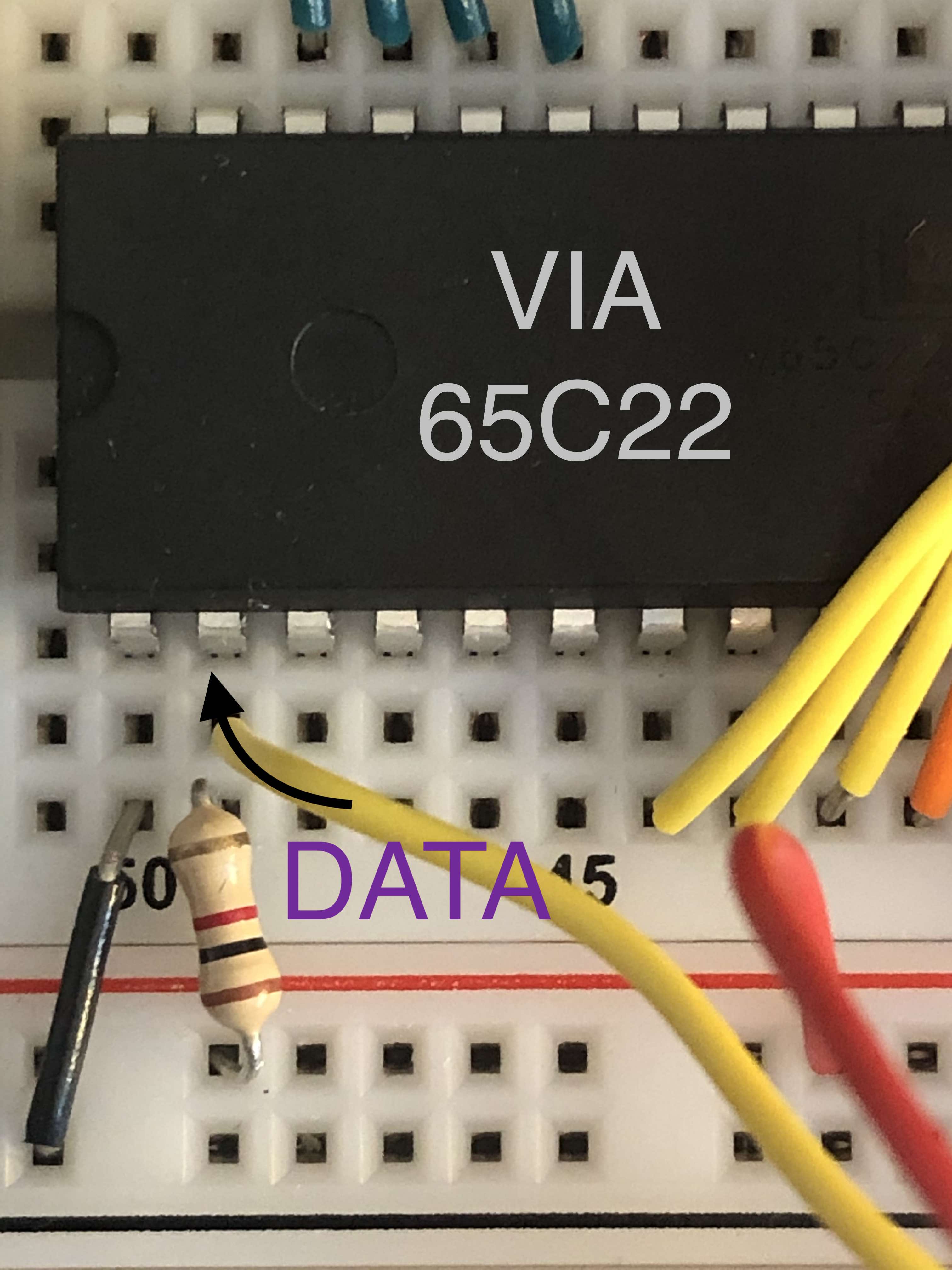 The two interrupt pins on the 6502 are used slightly differently. The non-maskable interrupt (NMIB) is edge-triggered, which generally means only one interrupt source can use it. But that’s great for PS/2, since we only want to interrupt on each clock signal once.

The interrupt request (IRQB) is level-triggered: the processor will generate interrupts as long as interrupts are enabled and the input is low. This means it’s much easier to service multiple devices, but there has to be some way to clear the interrupt on the other end - and we don’t really have that ability on the PS/2 bus, so it’s not a good choice, unless we want to add some glue logic. That sounds expensive, and I don’t have a lot of space left on my breadboard.

The WDC65C02S supports some additional opcodes, so I’m going to let vasm understand those with the -wdc02 flag. I also added -chklabels, -wfail, and -x. These warn when a label matches a mnemonic/directive, return an error code on warnings, and show an error when referencing an undefined symbol, respectively.

Set up the vectors for each of them - this replaces the .org $fffc from Ben Eater’s video:

In our reset handler, we will need to enable interrupts with

Now, it’s time to declare and initialize some memory. First, name four bytes in the zero-page:

The actual values aren’t important - they’re pointers to bytes in the first 256B of RAM.

The first two, KEY_BUF_X and KEY_READ_X are offsets into a 256-byte circular array. Let’s name that array:

The second two variables are used for decoding the PS/2 byte. For now, let’s initialize them all to zero in the reset handler.

All of this does nothing, but we’ve reserved all the space in RAM needed to decode the raw PS/2 byte stream.

As I mentioned before, the PS/2 clock rate is between 10-16.7 kHz, and the data line is only valid for the low half of the clock cycle.

My computer has a 1MHz clock, so that means we have 1M/16.7k = 59.88 cycles to completely handle the NMI. And the data is only valid in the first half.

We’ll read PORTA from the 65C22 VIA, and need to use some bitmasking to get the first bit. It would be very convenient if the high bit were set, instead of the low bit, but I’m already using PA7 for the E pin on the LCD, and don’t want to break compatibility with Ben’s code just for convenience.

So, during the interrupt routine, I’ll rotate PA0 into the PA7 position, and then mask it out.

And update the NMI handler to write the PS/2 bit into KEY_BUF:

Decoding a PS/2 bitstream takes a few more cycles than we can afford in our non-maskable interrupt handler. So, the handler is wasteful and writes the bit samples as bytes in a 256-byte circular buffer.

In our main loop, we can chase after the bitstream using a simple state machine.

The states are defined by the number of bits we’ve seen.

A nice abstraction would be to decode these scancodes into a buffer, which would allow us to do line editing and so forth, but I’m just going to print all the characters I recognize directly to the LCD.

and let’s go implement that now.

First, we need to create a map for the PS/2 scan codes. You can sort of see how the key matrix is wired in the keyboard.

Now, add another byte to the zero page so we can ignore break codes:

There’s still a ton more work to do, like Shift, Backspace, arrow keys and even outputting lines to the correct place on the screen. Like I mentioned above, it would probably make more sense to store these ASCII codes in a line buffer, or whatever suits your application’s purpose. You could even use another circular buffer with chasing pointers.

But hey, at least we can say HELLO, WORLD, and that’s what matters.

Fairly frequently, I saw extraneous NMIs. Since I’m not doing any error checking on the stop/start/parity bits, this would appear as a shifted bit in the byte stream. The first thing I changed was using a 1kΩ resistor on the NMI pin instead of 1MΩ. I thought the higher resistance was causing the voltage to rise too slowly. It certainly helped, but I still could rarely type a full 80-character page of text without seeing a desynchronization. I tried using a faster 1.8432 MHz oscillator, to see if my interrupt code was too slow, but that neither made sense, nor fixed the issue. (A 7.3728 MHz oscillator was too fast for the existing LCD code. Needs NOPs.) Finally, I wondered if the additional power demanded by the keyboard (and its long cable) was still causing voltage drops. I added another 10µF capacitor to the power rails, near the PS/2 power wires, and now it is much better. I still see desynchronization if I mash on the keyboard, but it’s waaaaay more usable than it was.